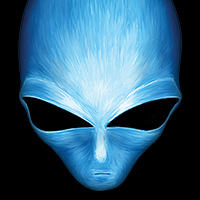 Speaking of web design, many early net friends who are interested in web design and Flash animation would remember my Internet ID of Alien and my homepage AlienHome. My interest in web design began by the end of the last century. I had been such a lucky boy who had access to the Internet as early as in year 1999 when it had not been so popular as it is today in China. Since then, I’ve seen so many wonderful websites using Macromedia (acquired by Adobe in 2006) Flash technology to create astonishing interactive effects. It was not before long that I made up my mind to build a homepage of my own. The reason why I choose alien as the theme of my homepage dates back to my childhood. When I was a kid, I was very fond of aliens and their stories. Being a big fan of aliens and their stories, I have even chosen the word Alien as my English name. Therefore, my homepage was named AlienHome.

By the end of 1999, the first version of my homepage, AlienHome.1 said hello to the world. At that time I was just a junior student in Shenzhen Middle School, where most other students were devoting themselves into the in-classroom studies. From then on, my passion for design has never been weaken. In 2001, AlienHome came to its 4th version. More than 4 million people have visited it. It gained the Golden Web Award and Webmaster Award in 2001. It won the Grand Prize in China’s First Pentium 4 Processor Computer Flash Animation Creative Contest in 2001, which was one of the most influential competition in Flash web design at that time.